The Department of Pediatric Dentistry is the youngest department among all departments of the dental profile: in November 2017 the team celebrated its glorious 40th anniversary. Nowadays, the Department of Pediatric Dentistry is the only independent department among all the dental faculties of medical universities of the Republic of Kazakhstan, an advisory and methodological center for children’s dental services, the organization of the educational process and scientific research in the field of pediatric dentistry.
The first Department of Pediatric Dentistry in the Republic of Kazakhstan was organized by order No. 107 of the Alma-Ata State Medical Institute of November 11, 1977 (since 1976 – an assistant professor course). The first composition of the department included: the head, associate professor D.N. Dzhumadillaev, associate professor V.M. Chapala, assistants – candidate of medical sciences T.K.Supiev, Ph.D. A.A. Kabulbekov, Ph.D. Kh.S. Mergembaeva, candidate of medical sciences E.S.Slamov. Gradually, the composition of the department expanded, specialists in pediatric therapeutic, surgical dentistry, pediatric maxillofacial surgery joined. Traditionally, from the day the department was founded, dental disease prevention specialists have been part of this structural unit. In-depth scientific research in the field of pediatric dentistry and pediatric dental services began in the 80s of the last century. The order No. 670 of the Ministry of Health of the USSR of June 12, 1984 on measures to further improve dental care for the population played a big role in this. This order emphasized that there are serious shortcomings in organization of the sanation of the oral cavity in children, in the prevention of dental caries and periodontal diseases. In order to eliminate these shortcomings, the need was emphasized from January 1, 1985 to ensure the implementation of a comprehensive program for the prevention of dental diseases among the population, including children and adolescents. The same order included in the nomenclature of medical specialties and medical posts the specialty “pediatric dentist”. For the first time, a standard curriculum and a one-year specialization (internship) program for this specialty were developed. In many medical universities of the country departments of pediatric dentistry began to open; Our republic was no exception.

Information about the teaching staff of the department

Heads of the Department of Pediatric Dentistry in different years: Dzhumadillaev Zhanibek Nalibaevich, MD, professor, in 1960 he graduated from the Department of Dentistry of I Tashkent Medical Institute. In 1966 he defended his thesis on “Anesthesia in prosthetic dentistry, the reaction of the pulp to the preparation of teeth.” From 1966 to the present, he has been working at KazNMU. From 1977 to 1988 headed the Department of Pediatric Dentistry, and from 1990 to 2009. – Department of prevention of dental diseases with a course of orthodontics. From 1984 to 1995 He was the dean of the Faculty of Dentistry of the University. In 1990 he defended his doctoral dissertation on the topic: “Prevention of complications in patients with heart defects with dental prosthetics.” In 1995, Professor Dzhumadillaev Zh.N. was elected as an academician of the Academy of Medical Sciences of the Republic of Kazakhstan, he is the author of more than 100 scientific papers. After the reorganization of the departments of the dental faculty prof. Dzhumadillaev Zh.N. worked as a professor at the Department of Pediatric Dentistry until 2012. Now he is on a well-deserved rest, constantly in touch with the team. 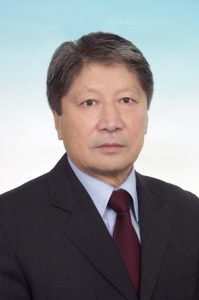 Supiyev Turgan Kurbanovich, doctor of medical sciences, professor, in 1959 Turgan Kurbanovich graduated from S. Kirov secondary school with a gold medal. In 1965 he graduated from the Faculty of Dentistry of KazNMU with honors and was accepted as an assistant to the Department of Surgical Dentistry. In 1972 he defended his thesis on the topic: “Materials according to the etiology, clinic and treatment of boils and facial carbuncles”. From 1977 to the present Supiev T.K. works at the Department of Pediatric Dentistry. In 1980, he was seconded to St. Petersburg State Medical University. Acad. I.P. Pavlova (formerly 1 LMI) to the Department of Pediatric Dentistry and Oral and Maxillofacial Surgery (Head. Prof. Solovyov I.M.), where he completed his doctoral dissertation with defend in 1984. Under the scientific supervision of Professor T. Supiev, 3 doctoral and 31 master’s theses are defended. Turgan Kurbanovich is constantly conducting public work both within the walls of the university and at the level of the republic. In 1995, Professor T.K.Supiev was elected as an academician of the Academy of Preventive Medicine. He was awarded with numerous diplomas and thanks to the KazNMU, the Ministry of Health of the Republic of Kazakhstan, the Ministry of Education and Science of the Republic of Kazakhstan, the medal “10 years of development of virgin and fallow lands” (1967), the badge “Excellence in Health Care of the USSR” (1980), the Certificate of Merit of the Assembly of the People of Kazakhstan (1999), and the Certificate of Honor Republic of Kazakhstan (2001). He is the Laureate of the Republican Prize “Ilham”, and in 2003. he was awarded the title “Kazakhstan honor worker”, in 2007 he was elected Honorary Citizen of the Panfilov district of Almaty region.

Ermukhanova G.T. Head of the Department of Pediatric Dentistry – 2014 – 2020
Ermukhanova Gulzhan Tleumukhanovna graduated with honors from the Faculty of Dentistry of the State Medical Institute in 1983. She worked at the Guryev Regional Dental Clinic, where she completed an internship, then worked as a dental surgeon, periodontist. In 1985 she was transferred to the AGMI: until December 1987 she was the secretary of the Komsomol committee of the dental faculty.
During all this time Ermukhanova G.T. continued to improve her professional qualifications – she worked as a teacher on an hourly basis at the Department of Pediatric Dentistry, was determined in the choice of the scientific direction of future dissertation work, passed the candidate’s minimum.
From 1987 to 1989, being an intern-researcher at the Department of Pediatric Dentistry, I collected material and in 1990, being an assistant of the same department, successfully defended her Ph.D. thesis on the topic “Differentiated approach to the treatment of children with hemangyms of the maxillofacial region “.
In February 1997, she was elected to the post of Associate Professor of the Department of Pediatric Dentistry, where she is currently working. Systematically improves pedagogical knowledge, professional skills; regularly improves his qualifications at the University of FPC. Has the highest qualification category of dentist.
In December 2002. entered doctoral studies at the RSCC “Stomatology”. Actively working on her doctoral dissertation, she completed a set of material on the topic “Improving the methods of treating benign tumors of the face and oral cavity in children.” In January 2007. defended her doctoral dissertation.
For 10 years she was the head teacher of the Department of Pediatric Dentistry. Since September 2011 by order of the rector of the university, she worked as the head of the pediatric dentistry module, from 2014 to 2020 – the head, from 2020 – the professor of the department of pediatric dentistry. Successfully conducts educational and methodological work; takes an active part in the development and processing of teaching materials, preparation of tests for midterm and current control. Conducts classes at 4-5 courses of the Faculty of Dentistry in groups with training in the state language and in Russian-speaking groups. At the Faculty of Dentistry, he heads the NDT on Dentistry, is a member of the Scientific Council of KazNMU.